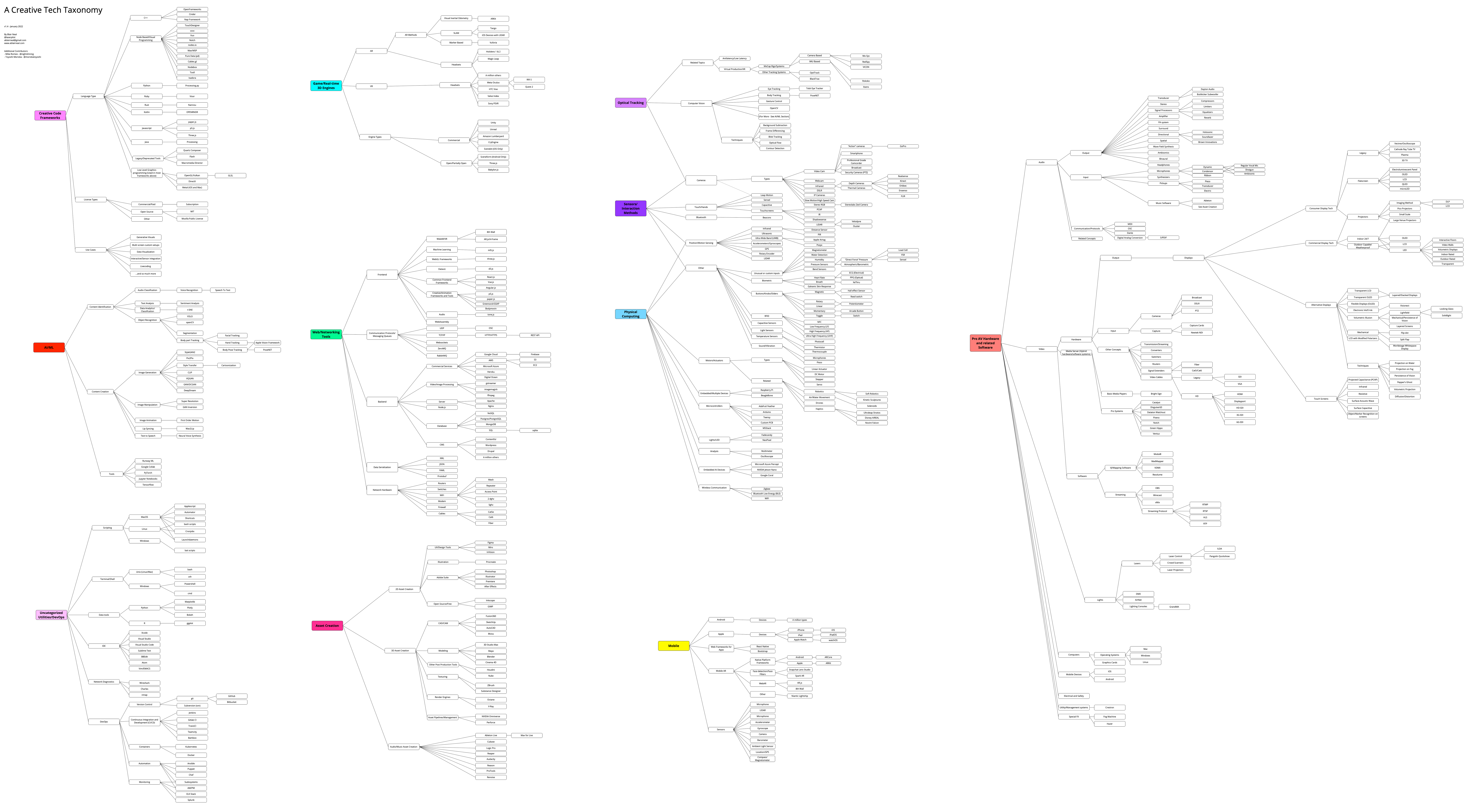 Link to the full-size image above

Creative technology is a topic that that I've been focused on for years. I've been writing some deep dive pieces on various topics like display technology, installation maintenance, and  projectors, but there has always felt like more to cover. There has always been a feeling of wanting to tackle something even larger, like a book, but articulating the reasoning for going after something larger eventually feels like a good first step.

Creative technology is a discipline that has been evolving from other fields for a long time, but every year it feels like it is becoming more and more of an established path in academia and professional circles. However, I feel that there is a still a lack of clarity about what this field is and what it encompasses. Creative Technology is a discipline that is exceedingly broad, and most people and organizations operate within a niche of the overall field. Developing a common language and classification system for creative technology and a set of grammars to work with can really allow us to make better "music" together and help educate newcomers in a broad, but quickly digestible way.  Having a taxonomy is also a useful way to have a historical mile marker for the state of the discipline in 2022, and maybe have a way to see what has evolved and changed 5 or 10 years from now.

To continue this conversation, I'm supplying a visual map of various tools and concepts utilized in the creative technology space. I originally made a version of this back in 2018, but have been updating it since then. As a caveat, the diagram is flawed as a hierarchical tree diagram and could really use an alternate method of visualization because of how complex and interconnected many topics are. To help with expanding this idea in the future, I'm also releasing a JSON file on Github that represents the exact same structure in my (originally) manually made visual map. The hope is that this file can be used to create alternative visualizations of the same data on an interactive site, and perhaps eventually be translated to other languages. One thing to keep in mind is that this classification system is primarily from my narrow perspective, and most of the map represents my personal awareness of certain areas.

Why make all this?

A large part of my background is in music, and that knowledge base often feels like it influences this approach I'm trying to articulate. As an oversimplification, music theory is a set of mathematical and conceptual systems that facilitate the creation of music between people. It is keys, modes, notation, rules of harmony, chords, instrumentation and many other ways of describing everything from silence to noise. You don't need to know music theory to make beautiful music, but formalizing the systems behind music has unlocked a lot of different areas of potential. I would argue that the primary function of music theory is for communication - for example, allowing people to play in the same key when improvising, but also to talk to the past and read and play some sheet music composed hundreds of years ago. Music theory gives beginners a place to explore and understand in a known, quantifiable space with seasoned professionals. It is a system that enables creativity.

Aside from looking at the known - another huge function of music theory is that it gives people a language and a set of tools to also explore the unknown in a systematic way. Learn the rules so you can break them in a meaningful way. The constraints should feel more freeing than limiting. Like Schoenberg's twelve tone row, people may look at the idea of standard musical keys, throw that out entirely, but keep the other formalized elements of rhythm and notation to develop something new. They can look at the very concept of tonality and find a space between that and noise that somehow still speaks to us in a deep, ineffable way. It is possible we would have stumbled on some of these musical discoveries by accident (and some we absolutely did, don't get me wrong), but I would argue that forging into the auditory wilderness for exciting discoveries was greatly helped by a collective system that helped people understand why you went there and also how to get there themselves. New edges are found all the time that continue to push music into exciting spaces year after year.

Instruments could have remained a group of individual noise makers that worked on their own (and probably worked a bit like that for a while), but as soon as people tried to get one to talk to the other in a pleasant way, the effect snowballed into some of the most incredible forms of human expression and art the world has ever seen. Strings, woodwinds, brass, percussion and everything else - composers know all the options and what their strengths and weaknesses are.

All of the above is to say: developing taxonomies and defining systems are critical elements of getting to better art. People can have a common language, a way to describe what works and what doesn't. They can define trajectories over past decades and look at where things are going in the future. Taking a big picture view of the creative technology space can help us see the forest for the trees as well.

So what kinds of systems and taxonomies am I talking about, specifically?

As I mentioned, I've written things like guides to: cameras, projectors, alternative displays - all with a focus geared toward making interactive installations. I did this because I couldn't find anything comprehensive at the time. When coming up with creative solutions for creative technology projects, it sometimes felt like I was starting an undefined research project every time. Most projects had a need of an input method, a processing method, and a display of some sort for feedback to a user. If all you know of displays are LCD monitors and touchscreens, that might be all you might think of for output. If all you know are webcams for interaction, that's all you'll ever use.

Of course there is other stuff out there, but not everyone has the time or interest to do the research - and frankly, they shouldn't have to. Research into this stuff is important, and can help with learning and finding solutions quite a bit. However, the process of deep thoughtful research can often feel divorced from the process of free flowing creativity. Having a shorthand reference of tools, approaches, and rules can capture sparks of creativity that wouldn't have been there otherwise. Imagine if musicians had to agree on a new tuning system or had to make their own instruments every time they wanted to get together and play.

The systems are here for you, come play music with us.

The thoughtful creativity you bring to the table is considerably more important than knowing how to wield all levels of a complex technology stack. Personally, open source software tools taught me so much about this. A small group of individuals working on tools like Processing, Openframeworks, or Cinder abstracted the approach of difficult low level programming problems and saved literal years of development for everyone who used those tools after them. Going through and learning the end-to-end pipeline for drawing a pixel on screen from scratch is certainly a worthwhile effort for some, but others just want to draw a circle on a screen and make some art. I'm speaking about more than just open source software here, though. This is about defining some of the other layers to the puzzle of finding solutions with creative technology - like hardware, displays, sensors, testing, etc.

On the professional and industry side of things (at least in the West), there is some protectiveness to sharing some of this knowledge that ultimately impedes creativity and innovation. Individuals at companies spend a lot of time solving and researching the same problems over and over, typically low hanging fruit problems that have already been solved by other companies that chose not to or didn't think to the share the results. Content management systems, people tracking with cameras, stretching images across multiple displays, uptime monitoring, etc. - most could be solved once and distributed. Available technologies and solutions are largely the same for everyone in companies that utilize creative technology, but their process and creative approach for how they used that technology should really be what defines the company's value. There are absolutely companies that share a lot of tools and findings, but hey - there should always be more.

To close, my taxonomy visual is not meant to be definitive or even remotely correct, just presented as a conversation starter. With every new branch I added, I questioned the utility of what I was adding and thought about how other people would classify things in completely different ways. I also think its only one piece in the puzzle towards creating a common language and way of working. Music theory is not just a list of instruments, but a whole language of collaborative expression. I would love to join with others on a way to keep this open and expansive - I think setting up a GitHub pages link with a graph driven the taxonomy JSON would be a great next step.

Thank you for reading. I'll close by sharing some links to some other great resources that help to cover a wide range of creative technology topics. Please leave any comments below, or send me suggestions (or a pull request) about what to add to the map.

Gallery of individual charts - you can right click to save the full size versions: